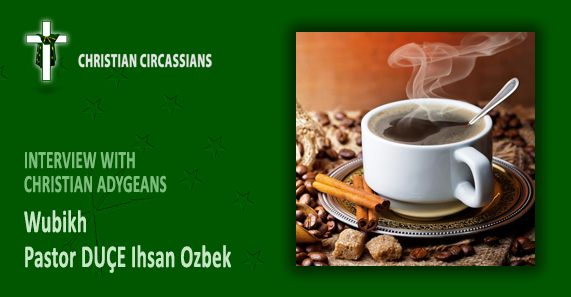 Could you tell us a little bit about yourself? (Your educational bacground and profession)
I studied Christian theology. I have a master degree in theology Bth and Mth. I’ve been serving as a Pastor since 1996, I am the Pastor of the Ankara Kurtuluş (Salvation) Church and at the same time the leader of the Kurtuluş Church consisting of 32 churches in 26 differences cities. I have a company operating in various fields, mainly tourism.

Which clan of Adige/Abkhaz tribes are you belong to?
I am from the Decen tribe of the Wubikhs. My family settled in Balikesir-Gönen after the Circassian Migration. My mother is Kabardian from Kayseri. I was born in Istanbul,1963.

How important is “being Circassian” in your life?
As a circassian who was assimilated and had to live separately from his family, when I was young, I did not feel like Adyge. But as I getting older, I started to myself as Circassian. While there were only Circassians in my lineage until to my generation, all brothers and sisters, including me, got married “from outside”.

How was your environment? Was your family religious?
My family was secular. My mother became more religious as she getting older. Since my connection with them decreased at my young ages, they did not have much effect. The boss of the factory where I work started to train me as a Muslim when I was 11~12 years old. In those years, I was preaying five times in a day. Several years later, I stopped believing in God through life’s difficulties.

Why did you stop believing in your ex religion?
When my parents got divorced i was unhappy ans feeling lonely and then Islam entered my life. However nothing is going my way in life over the years, things did not be in different. My difficult and unhappy life has always lasted, and my circle started to be filled with people who explained this with the political system. Thanks to them, I started to say that I was an atheist. I became politicalltt radical and got into many incidents. I have three convictions and totally of one year in prison.

How was your relationship affected?
My family did not react at all, my father ignored this mattee, my mother greeted it with respect. I didn’t have much relationship with them anyway. The hardest thing was with my friends. They walked away acting harshly and criticially, my relationship with the rest was not the same as before.

Are there things that are the nature of your belief but have not practiced? (wearing hijab, dancing, not being with men or women, etc.)
There is nothing I do not practice because of my belief.

How’d you classify your political views?
Did you make distinctions by political views after the leaving Islam? I left Islam when I was teenage and my political views took shape later. I adopted leftism, later when I became a Christian, I tried for a while to reconcile my belief with leftist views. It’s hard to briefly state a political opinion, it can said that the libertion democrat emphasize human rights and equality.

What advice would tou give Ex Muslims who are on the border, so to speak ?
I.e. they are thinking about convert to Christianity but held back for one reason or another.. Our society shows a negative reaction to those who choose to be Christians. Families, friends, acquaintances react and leave them alone. This situation sometimes leads to upsetting reactions. On the other hand there is only one GOD, and this God revealed Himself to people through Jesus Christ. The person who takes Jesus Christ into his/her life enters a new relationship with God. So no matter how serious the reactions from society are, a true relationship with God is worth everything. It makes no sense to fear society or family and turn away from God..He was invited to a relationship with God, not a Christian religion. It should not be rejected.