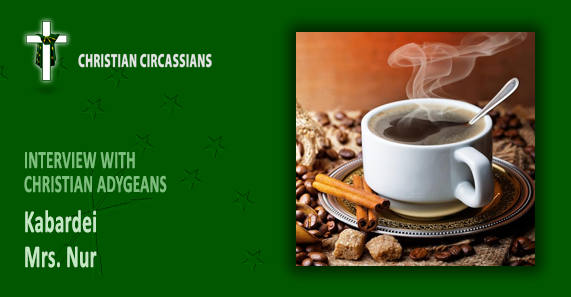 Could you tell us a little bit about yourself? (Your educational background and profession)
My educational back ground is high school. I work in the public relations department of a supermarket. I was born in Kayseri. I live in Istanbul, married and have a child.

Which tribe of Adyghe-Abkhaz clan are you belong to?
I am Kabardei.

How important is Circassian culture in your life?
It is especially important to me as a woman. My husband also Adyghe. We can speak barely Adyghabza, as far as we know, we are trying to teach our children.

How was the environment when your grew up in?
I had two different environment . The first one is around my village, I don’t have much memories, I was too young. But environment was not religious. An example, at all I don’t remember praying at home either Ramadan fast or wake up for Sahur. Another example, there were no women wore hijab, it’s just a few married women only wore headscarves. When I came to Istanbul, I was in second grade of school. I did not have much difficulty. Whole things were normal, and neighborhood we were live in, that wasn’t like now.

Were you raised religiously and to what extent?
Nope.

Why did you stop believing your ex religion?
Actually, I was not exactly Muslim. I was believing in God like everyone else. However my family didn’t raise me like that. The last phrase, that the Adyghe girls around me Adyghe girls around me put forth too much religion made me think. I’ve said myself, I cannot live like this, but I also want to be a believer and started to searching.

What do you mean when you say you cannot live like this?
Namely, two gender cannot sit together (haremlik&selamlık) women separated men, it’s because haram to be with men, however Circassian girls go out in front of everyone and dance with men. I see this situation as hypocrisy. As for me they’re spoiling our culture and damage it this way.

How affected your relationship with your family?
I converted to Christianity after the marriage. My Adyghe husband is atheist, he respects my choice. – Are there things that you believe in but do not practice ? (Wearing Hijab, or Islamic traditional clothes, not communicate with women/men?) The most important reason for me to convert Christianity is my Circassian Culture. I cannot understand indeed how on Adyghe can be a Muslim. I am not considered a highly educated person, but what I got this when a person becomes a Muslim, literally turns out “being Arab”, Arabizing with everything from clothing, manners, even every movements. I have witnessed so many times that man who called himself Adyghe, did not shake the hand of the Adyghe woman, before her, as a sin and caused her hand to stay in the air. Could there any greater rudeness than this?! It seems to me hypocritical that men go out for wedding and wandering girls’ around.

Did leaving Islam cause the problems in your family relationship?
Nope.

Have there been differences in your political aspects after the leaving Islam?
I don’t interest with politics.

As a person who raised in the Muslim community have you encountered any pressure?
I didn’t have much trouble in my villager life (maybe just because I was little girl, it didn’t affect me a lot) but life in city, not easy for a woman, getting harder for the last 5-6 years. Already “being woman” itself is a problem in this country. All women live under huge pressure and face with this. Even going out is the reason for harassment, you see what’s happening here.

Have you researched the ex Muslims?
Nope.

Did you mention or hide to your convertion from acquaintances?
No, I didn’t hide anything from anybody. – What would you recommend to those who want to become Christians but withdraw in one way or another. Please do not hesitate. There is nothing more harder than being a woman. Let them always think of Christian countries. Please consider this , is there any Christian country that so much violence against to women? Is there a Christian country that getting marry with young girls? Don’t hesitate. If they want to believe in a religion, they must be Christians. Both for themselves and for humanity.

Do you have a message you want to convey to the Circassian community?
Yes. This journey everything of us is slowly dying. Our tongue died first. Then our Xabze. Now only our name remains. It’ll die too in time. I always want them to think about it when they decide on anything.

I Thank you for sharing your thoughts with us.
Thank you too. Wish you good luck.