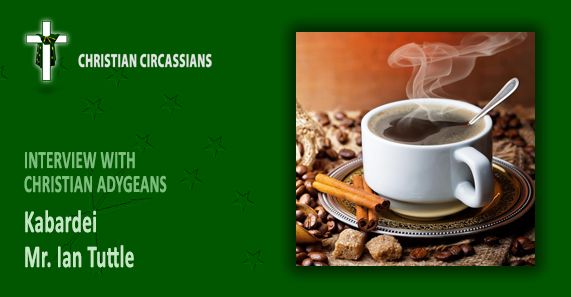 Could you tell us a little bit about yourself? (Your educational background and profession)
I’m an American citizen, with a bachelors degree in International Relations. I work within the security industry and I’ve lived and worked in Pyatigorsk, Russia for two years. I speak Russian and have an interest in the North Caucasus, specifically of the Circassian Nation.

Which tribe of Adyge-Abkhaz clan are you belong to?
I was inducted into the Kotsev family as an uzden through Xabze. They are Kabardians of the town called Sarmakovo in KBR, Russia.

How was the environment when you grew up in?
I grew up in an American household (of Anglo Saxon, Germanic and Russian cultural backgrounds), but we shared many customs that were similar to Circassian ones of respect of elders, modesty, honor, respect of women and of guests. It wasn’t surprising how normal Circassian customs were to me as we lived them on my household.

Were you raised religiously and to what extent?
I was raised a Christian and our domination is Anglican. 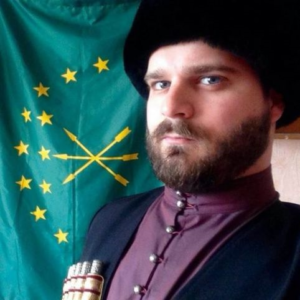 Why did you stop believing your ex religion?
I never stopped being a Christian and never converted to another religion. How affected your relationship with you family? My adopted Circassian family is Sunni Muslim in some aspects of their life, but they have never been to a mosque. They celebrate Ramadan and don’t cook pork, but these are the only religious traditions they do. They fellow more of the customs of Xabze in their daily lives. They don’t have any issues with me being a Christian and I don’t feel any negative affects. My khunkh, even has gone to Orthodox services.

Are there things that you believe in but do not practice ? (Wearing Hijab, or Islamic traditional clothes, not communicate with women / men )
They don’t practice the wearing of hijab, women are respected and honored in the home. Men and women do eat separately in the household. Grandfather Husan is the thamade and his word is law in the house.

Did you leaving Islam cause the problems in your family relationship?
I was never Muslim.

How’d you classify your political views?
I personally have no problems with my Muslim peers. Jesus teaches to love your neighbor. I do reject the ideology of Islamists and Wahhabists, as they are radicals and it’s important to remember that Mohammad said “submit,” whereas Jesus said “choose.”

As a person who raised in the Muslim country have you encountered any pressure?
I wasn’t personally raised in a Muslim community, but I know many Circassians in Russia, the UK, USA and Canada who left Islam because of it’s contradictory views with Xabze and that Islamic cultural norms are superseding Circassian norms.

Did you mention or hide to your convertion from tour acquaintences?
I was never Muslim and I have yet to come across a Circassian Muslim who openly confronted me about my religious beliefs. In the North Caucasus, I felt it was customary to greet people with traditional Arabic greetings when not knowing the nationality of the person. The region is dominantly Sunni Muslim and it seemed appropriate to do so. I was always welcome and felt safe while in the North Caucasus and also in my home in the United States.

What’d you recommend to those who want to become Christians but have retreated one way or another?
I’d recommend to live a Christian life in your own daily habits and if you live in a country that values tolerance and freedom of religion, express it openly. If you don’t live in a country that shares those values, then live a Christian life in your actions and remember your Circassian cultural traditions. Hate bigots hate, intolerance breeds intolerance, love your neighbor as yourself.

Do you leave a message for Circassian society?
My message to Circassian Christians is don’t let differences in Christian domination divid you. Christians and Circassians stood stand together regardless of creed or nation in which they reside. Disunity only leads to cultural self destruction.