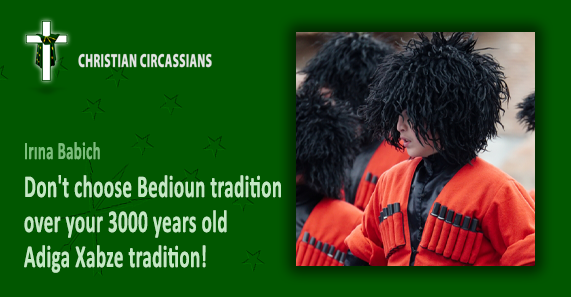 rina Babich
Doctor of Historical Sciences, Institute of Ethnology and Anthropology of the Russian Academy of Sciences, Chief Researcher of the Caucasus Department (Moscow, Russian Federation)

At once, when I was about eight years old, I told my mom the earth was round. A terrible scandal broke out in the house, my father was very angry because the Koran says the earth is flat. To believe on the contrary is against religion. Therefore, the sheikh fought with his geography teacher in every possible way. More than 500 years have passed since the time of Galileo, who claimed that the world was round despite persecution, yet ignorance in the people of the 20th century remained equally powerful and harmful.

We, today’s Adyges, are descendants of a people who were once powerful, cultured. We have things to be proud of, something to preserve and revive – beautiful customs, language, moral and ethical foundations..

Circassians have a rich cultural and historical tradition and this should not be replaced by ignorance and lack of spirituality.

We do not need to give up the 3,000-year-old “Adyghe Khabze” law for the sake of Bedouin customs in order to protect and establish ourselves as Adyghe.

Circassian people during the Caucasian War. It was the forcible expulsion of millions of indigenous people from their homeland and resettlement to the Ottoman Empire and the countries of the Middle East. The Russian tsarist colonial policy of the Turkish Sultan led to false promises of 2.5 million Circassians who left their homeland. Turkey, Egypt, Syria, Jordan, Libya, Cyprus broke … Many died of hunger and disease. The situation of the deceived refugees was extremely difficult. Parents sold their children into slavery to feed themselves and ensure the survival of their children. The Turkish sultan did not keep his promise and began to call for immigrants into the Turkish army. The return of the settlers to their homeland was impossible. II. Alexander made a decision on all petitions: “There is no turning back.” The Muslim clergy, along with Tsarist Russia and the Ottoman Empire, played an important role in deceiving and destroying an entire people.

As Islam becomes weaker, Christianity or neo-paganism spreads more actively. Therefore, many Shapsugs from Lazarevsky and Tuapse areas, which practically do not have Islam, are more likely to convert to Orthodoxy rather than Islam. There is almost no Islam in the villages of Shapsug, not even the single imam of the Shapsugs in the Lakhzarevsky district, who lives in the village of M. Pseushkho and serves in a mosque in the village of B. Pseushkho, does not attend the funeral in other villages. As a result, traditional paganism, for example, a raining ceremony, prevails among the Shapsugs in the Black Sea region.

The radical wing of Islam that emerged in the second half of the 1990s and still exists today played a negative role. The transition of some young people to the “Wahhabi” movements of the 1990s and 2000s and the use of terrorist acts with the word “Allah Akbar” drove many “peaceful” Circassians away from Islam. This is why many say that such Islam is not Islam, and “Muslim Adyges do not know God, they are following the wrong path and this path cannot lead to Christ.” However, in our opinion, the basis for Circassian interest in Protestantism is the crisis of the “mountain” ideology itself – is the crisis of their own identity

References: Irina Babich, Doctor of Historical Sciences, Chief Researcher of the Caucasus Department of the Institute of Ethnology and Anthropology of the Russian Academy of Sciences (Moscow, Russian Federation)